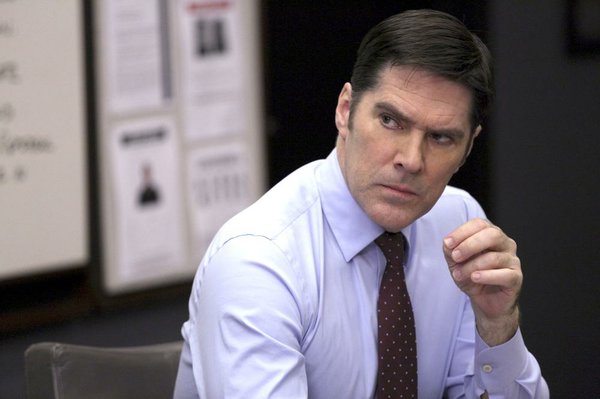 It case you didn’t get the memo, Thomas Gibson has been fired from the CBS police procedural Criminal Minds.

The 54-year-old veteran actor (Dharma & Greg, Chicago Hope) had been with the show since it premiered in 2005 and played FBI Special Agent Aaron Hotchner.

This is the same series, fans will recall, that saw star Mandy Patinkin simply decide without notice not to show up for the third season. Veteran Joe Mantegna was quickly recruited to step in.

It has long been rumored that Gibson has had dust-ups with the members of the cast and crew, but the final straw followed an alleged incident last month in which Gibson allegedly kicked a writer during an alleged on-set altercation. Allegedly.

Gibson was initially suspended for two episodes pending an internal review. Then executives for ABC Studios and CBS Television Studios, which produce the series, released this statement: “Thomas Gibson has been dismissed from Criminal Minds. Creative details for how the character’s exit will be addressed in the show will be announced at a later date.”

After that, Gibson, who was directing the episode, issued his own statement: “There were creative differences on the set and a disagreement. I regret that it occurred. I love Criminal Minds and have put my heart and soul into it for the last 12 years. I had hoped to see it through to the end, but that won’t be possible now.

“I would just like to say thank you to the writers, producers, actors, our amazing crew and, most importantly, the best fans that a show could ever hope to have.”

Those fans will have to deal with Hotchner’s departure when the series returns Sept. 28. Criminal Minds revolves around a special team of FBI profilers with the Behavioral Analysis Unit based in Quantico, Va.

Not fired and returning to the ensemble next month will be Mantegna, Matthew Gray Gubler, A.J. Cook, Kirsten Vangsness, Aisha Tyler and newbie Adam Rodriguez.

Original cast member Shemar Moore (he played Agent Derek Morgan) left the series suddenly in March “to try new things.” With the contentious Gibson gone, maybe Moore will try something new back on Criminal Minds, perhaps as head of the BAU.

Gibson, who seemingly played Hotchner with one scowling expression (see photo), has hired the Los Angeles-based Miller Barondess law firm to determine if he has any legal grounds for a lawsuit, according to Us Weekly.

• Pink slips. Gibson is the latest actor to be kicked off a show. Here are a few others from other years.

An out-of-control Charlie Sheen was fired from Two & a Half Men. Isaiah Washington was fired from Grey’s Anatomy for using a gay slur against co-star T.R. Knight. Famous diva Shannen Doherty has been fired from three shows — Beverly Hills, 90210; Charmed ; and the 2008 reboot, 90210.

John Amos claimed that he was canned from Good Times over creative differences. Struggling with substance abuse, Mackenzie Phillips was sacked twice from One Day at a Time. TBS dumped CeeLo Green and his reality series The Good Life shortly after he pleaded no contest to a charge of giving a woman the drug Ecstasy.

In addition, Columbus Short was fired from Scandal after allegations of domestic violence. Robert Downey Jr. was fired from Ally McBeal. This was before he cleaned up his act. Suzanne Somers was eased out of Three’s Company after demanding a 500 percent salary increase, and Gary Dourdan was let go from CSI after an arrest for drug possession and a contract dispute.

Wilmore, the former “senior black correspondent” for The Daily Show, took over the slot previously occupied by The Colbert Report when Stephen Colbert went over to CBS.

Trevor Noah took over The Daily Show when Jon Stewart bailed out in September.

In a report from The Associated Press, Comedy Central president Kent Alterman had words of praise for Wilmore and his team, and said although the show had improved, “unfortunately it hasn’t resonated with the audience in a way that it would need to for us to continue.”