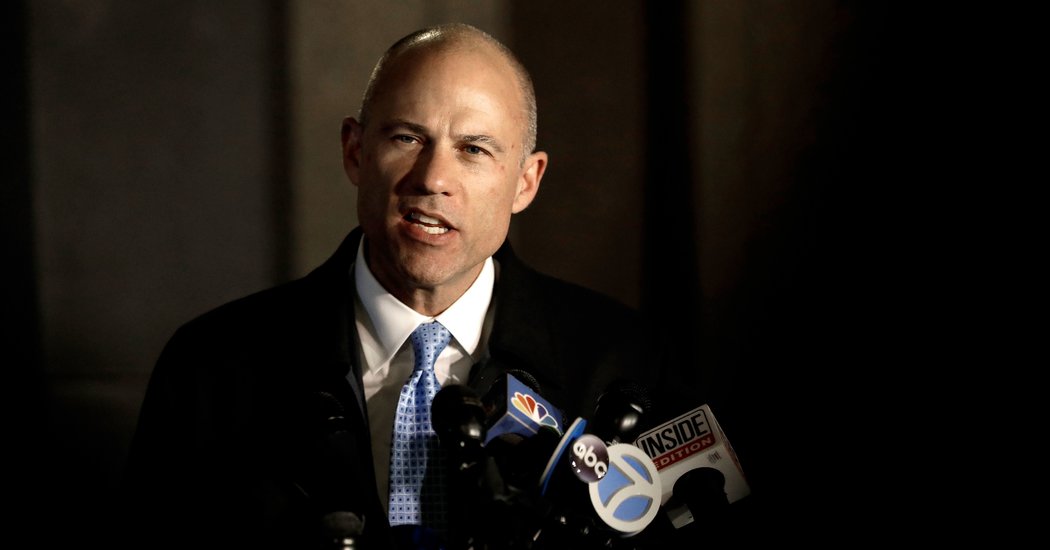 In a significant escalation of the criminal case against Michael Avenatti, the brash lawyer known for representing Stormy Daniels in lawsuits against President Trump, federal prosecutors in California announced on Thursday that he had been indicted on three dozen counts.

The authorities accused Mr. Avenatti of stealing millions of dollars from five clients and of lying repeatedly about his business and income — not just to clients but also to an I.R.S. collection agent, creditors, a bankruptcy court and a bankruptcy trustee.

Mr. Avenatti was indicted by a federal grand jury in Santa Ana, Calif., on the new charges, which included tax fraud and bankruptcy fraud, adding to charges of wire fraud, bank fraud and extortion that were filed against him last month in California and New York. If convicted of all the crimes of which he has been accused in California alone, prosecutors said, he would face a maximum of 333 years in prison, and an additional two-year mandatory sentence on an identity theft charge.

“It is lawyer 101: You do not steal your client’s money,” Nicola T. Hanna, the United States attorney in Los Angeles, said at a news conference Thursday, describing Mr. Avenatti’s business as a Ponzi scheme of sorts. “Money generated from one set of crimes was used to further other crimes, typically in the form of payments used to string along victims so as to prevent Mr. Avenatti’s financial house of cards from collapsing.”

Mr. Avenatti denied all of the allegations on Thursday. He has suggested that the case against him is politically motivated, following his aggressive representation of Ms. Daniels, the pornographic film actress who said she had a sexual relationship with President Trump and received a hush-money payment in October 2016. (Two suits that Mr. Avenatti brought on behalf of Ms. Daniels against Mr. Trump have been dismissed.)

“This case is based on the facts and the documents,” Mr. Hanna said Thursday, noting that the charges stemmed from an inquiry by the I.R.S.’s criminal investigation division that dated to September 2016, before Mr. Trump was elected and well before Mr. Avenatti began representing Ms. Daniels.

Among the five clients Mr. Avenatti is accused of defrauding across four matters, prosecutors said, one was a paraplegic man, Geoffrey Ernest Johnson, who won a $4 million settlement from Los Angeles County four years ago but had received only “a fraction of the money” through periodic payments that never exceeded $1,900.

“Mr. Avenatti stole millions of dollars that were meant to compensate Mr. Johnson for a devastating injury, spent it on his own lavish lifestyle, then lied about it to Mr. Johnson for years to cover his tracks,” Josh Robbins, a lawyer for Mr. Johnson, said Thursday. “His actions have left Mr. Johnson destitute.”

Mr. Avenatti lied to clients about having received a total of more than $12 million in settlement payments, a share of which he would have been entitled to keep for his work, prosecutors said. He told clients the money had not yet arrived or, in one case, that he had already forwarded the funds to the client. He paid out small portions of what was owed to the clients, calling those payments “advances on the settlement,” prosecutors said.

Mr. Avenatti put most of the client money toward his own expenses, the authorities said, including a $5 million private jet that he co-owned, which prosecutors said they had seized on Wednesday. In the purchase of that aircraft, according to the charging documents unsealed Thursday, Mr. Avenatti used $2.5 million of a client’s $3 million settlement, paid in 2017, while he told the client that the settlement would be paid in installments over eight years.

In other instances, the indictment said, he put client money toward paying personal legal expenses, paying creditors after his firm had filed for bankruptcy, and paying costs associated with a coffee company he owned.

He also dodged taxes, some that he owed himself and others that were owed by his firm, prosecutors said. They alleged that Mr. Avenatti had lied to an I.R.S. revenue officer and had taken steps to prevent the government from collecting on tax liens and levies since 2013.

Though from 2015 to 2017 he withheld taxes from the paychecks of employees at the coffee company he owned — Global Baristas, which ran Tully’s coffee stores — Mr. Avenatti failed to pay more than $3 million in payroll taxes to the government, prosecutors said. They accused him of trying to obstruct the government’s efforts to collect nearly $5 million in unpaid payroll taxes and penalties by routing coffee-company money to different bank accounts, including one associated with a car-racing company he owned.

“As the tax filing season comes to an end, the indictment filed today sends a clear message,” Ryan Korner, the acting special agent in charge of the I.R.S.’s Criminal Investigation division in Los Angeles, said Thursday. “We will investigate all individuals, including high-profile attorneys who violate the tax laws.”

At the time of Thursday’s announcement, Mr. Avenatti was out on $300,000 bail after having been arrested late last month in New York, where he was accused of demanding millions from Nike’s lawyers while threatening to reveal what he has described as improper payments to college basketball recruits by the sportswear giant. He is due to answer to the new charges against him on April 29 in federal court in Santa Ana.

“I intend to fully fight all charges and plead not guilty,” Mr. Avenatti said on Twitter after the new charges in California were announced. “I look forward to the entire truth being known as opposed to a one-sided version meant to sideline me.”

“For 20 years, I have represented Davids vs. Goliaths and relied on due process and our system of justice,” he said. “Along the way, I have made many powerful enemies. I am entitled to a full presumption of innocence and am confident that justice will be done once all of the facts are known.”

Mr. Avenatti, 48, was a fixture on cable news as an antagonist to Mr. Trump as Ms. Daniels’s case played out. He and Ms. Daniels parted ways this year, and his firm again filed for bankruptcy last month. Even since he was first charged last month, he has turned to the news media to mount his defense.

“I can take a tremendous amount of punishment and keep going,” he told The New York Times days after he was arrested. “Anytime you’re charged with any felony you have to take it seriously, and I’m concerned about it,” he said, quickly adding: “The government has me in their cross-hairs, and there are reasons for that.”

He declined to explain what exactly he meant by that.