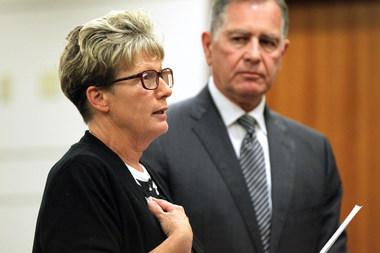 LORAIN, Ohio — Lorain attorney Jack Bradley is synonymous with some of the most high-profile criminal cases in Lorain County.

He was the lawyer in a 2010 case in which his client, a 17 year old, was charged with killing a man after stabbing him 55 times. The teen, who said he had been sexually abused by the man for three years, received a five-year probation sentence.

He was also the defense attorney in a case that drew national attention in the 1990’s involving a Lorain school bus driver accused of taking 5- and 6-year-olds to the home of a male co-worker police said molested the children.

Bradley has made a name for himself in and out of the legal profession by taking on tough, hard-to-defend, sometimes sensational criminal cases.

“I have found him to be a reasonable man dedicated to finding justice in cases,” said Lorain County Prosecutor Dennis Will. “I can say that reasonable is the best way to describe him.”

At 67, Bradley has been practicing law for 39 years and shows no signs of slowing down. He doesn’t always win cases — he admits he wins about half the time. When he loses, he said he finds consolation in knowing he got the best deal possible for his clients.

Perhaps some of his affinity for defense work can be traced to the six years he taught fourth grade at Emerson Elementary School in Lorain. While some of his students came from affluent families, he also had those who grew up poor.

“I always enjoyed teaching, but I saw it as a way to make money while I worked my way through law school,” he said. “I always planned to be a lawyer. I was always interested in representing citizens accused of a crime. I got involved with defending teachers with grievances while I was a teacher.”

After getting his law degree, he did what many new lawyers do. He sat in the courtroom and waited for a judge to assign him cases involving indigent clients.

“I would get assigned two or three a day and work their cases in Lorain Municipal Court,” he said. “It was a lot of work for a little money, but I learned a lot.”

He was hired by Lorain lawyer (and future judge) James Burge. Bradley opened his own practice 10 years later. Eight years ago, he took on Michael Stepanik as a partner. Bradley earned his stripes as a criminal defense attorney in the 1980’s and 1990’s, going head to head with tough county prosecutor Greg White and his equally tough chief assistant, Jonathan Rosenbaum.

“It was a battle in those days,” Bradley said. “I remember one time my daughter asked me, ‘Are you ever going to win a case?'”

He represented former South Amherst treasurer Kim Green, who this year pleaded guilty to theft charges involving more than $600,000 in missing money from the village. She was sentenced to six months in jail and agreed to pay back more than $100,000 over the next five years after Bradley argued she had a severe gambling addiction.

But it’s the case involving school bus driver Nancy Smith that keeps him up at night. Smith and Joseph Allen, the man police said molested the schoolchildren, were in and out of court for years after their convictions, appeals and reversals. In 2013, Smith pleaded guilty to less sexual offenses and was allowed to go free after serving 14 years in prison. Allen remains in jail serving a life sentence.

“That case was a miscarriage of justice,” said Bradley, adding, “Wouldn’t someone have seen a school bus dropping off children at a house? There was no evidence beyond the testimony of the children, who could have been coerced.”

Bradley, a native of Lorain, still lives in the city where he said he intends to stay.

“I live a block from the park, right by the lake,” he said. “My office is downtown. Why would I leave?”

“We both end up working weekends,” Giardini said. “While other people are enjoying themselves, I see Jack in his office on Saturdays and Sundays working on his cases.”

Giardini said Bradley is a huge supporter of Democratic candidates in the county, as well as candidates for state and national office.

“His wife, Debbie, is very active in campaigns,” Giardini said. “Jack is too busy to make phone calls, but he lets us use his offices.”

Bradley supports other community causes but mainly behind the scenes.

“Even though it’s rare to see his name on a placard as a sponsor, we know how much he gives to the community while not seeking publicity,” said Lorain Mayor Chase Ritenauer.

Bradley doesn’t like to talk much about his pro bono work but says he sometimes does it if he believes in a case.

“I’ve found when I do a case pro bono, I am repaid tenfold,” he said. “The greatest reward comes with the words ‘not guilty.'”

His legal services don’t come cheap, but he’s willing to work with clients like a woman who stopped by his office recently to make a payment for a legal bill.