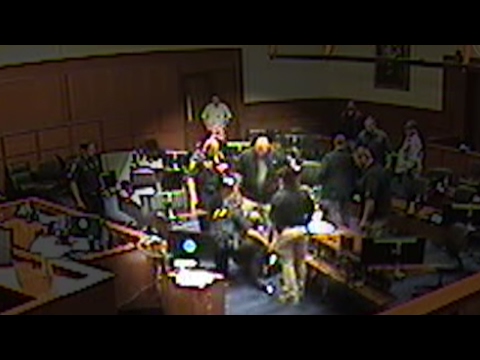 Marcus Mumford’s lawyer urged a judge Wednesday to dismiss all criminal charges against his client, citing “outrageous” government misconduct and a lack of authority by deputy U.S. marshals to wrestle Mumford to the ground and stun him with a Taser gun while he was arguing on behalf of Ammon Bundy in court last fall.

Marshals took Mumford into custody on Oct. 27 just after a jury acquitted Bundy, the leader of the Malheur National Wildlife Refuge occupation, of all charges in the case. The jury also acquitted six co-defendants.

“Mr. Mumford stood in the well of the courtroom and protested that his client should not be held without lawful authority a an argument made frequently and with vehemence by defense attorneys,” his lawyer, Michael Levine, argued in a written motion. “In response, he was physically and outrageously attacked and subjected to potentially lethal force.”

The charges are all misdemeanors and were revised slightly under a new criminal information filed in court this week.

After Mumford had achieved a “magnificent victory,” marshals tackled him as he questioned the government’s authority to continue to hold Bundy on federal charges pending in Nevada and demanded to see paperwork to back it up, Levine said.

Once Mumford was down on the courtroom floor, he was stunned in the back with a Taser, he and his lawyer said. Mumford said his shirt was ripped. He’s taking cortizone shots for the injury, Levine said.

The prosecutor defended the charges, contending Mumford was blocking marshals from taking Bundy back into custody at the end of trial.

One of the female marshals deployed her stun gun against Mumford, Ohms wrote.

“The U.S. marshals acted under a lawful order from the District of Nevada that they were obligated to enforce,” he wrote. “The government believes that the evidence will show that when the marshals attempted to remove the defendant’s client, the defendant impeded them.”

Marcus Mumford’s shirt was torn during his take down by deputy U.S. marshals in a federal courtroom on Oct. 27, 2016. Courtesy of Marcus Mumford

Mumford’s lawyer, citing a courtroom videotape and transcript from the day of Mumford’s arrest, dismissed the government’s account and probable cause affidavit as flagrantly inaccurate.

“On the video, Mr. Mumford is not seen flailing his arms or intentionally blocking the USMS agent, who had come up behind him as he talked,” Levine said. “Mr. Mumford is not seen ‘to raise his clenched fists’ in a boxer’s stance. … He neither threatened the officers nor blocked their access to his detained client, who remained seated throughout.”

Levine submitted the videotape to the judge, and a transcript of the encounter from the court reporter.

“Mr. Mumford followed the usual and ordinary procedures of the courtroom when presenting his arguments. He rose to present his argument after attorney Olson completed his presentation. He was acknowledged by the court. After being corrected by the court and ordered to lower his voice, he can be seen leaning into the microphone, complying,” Levine wrote. “The court did not hold Mr. Mumford in contempt for his tone. Yet the USM personnel entered the well of the courtroom and interrupted Mr. Mumford’s presentation to the court, telling him to ‘stand down.’ The court had to order the USMS personnel to ‘back up.’ This infringement on judicial authority by the executive branch alone requires correction.”

Mumford’s lawyer also contends that the marshals, who had control over defendants and spectators in the courtroom, didn’t have authority to detain him. U.S. District Judge Anna J. Brown could have chosen to hold Mumford in contempt of court, but she didn’t.

The prosecutor countered that the court was in recess when the marshals moved in on Mumford.

Ohms has asked for a three-day trial in April before a judge, but Mumford’s lawyer wants a jury trial.

The prosecutor argued that a trial before a judge is appropriate for misdemeanors or petty offenses. He discounted Mumford’s argument that it would be awkward for marshals to testify before a judge whom a federal officer is required to protect. The marshals involved in the Mumford takedown, Ohms said, were from all over the West, including Alaska, California, Colorado and Montana and Oregon.

Mumford’s lawyer said the court has discretion to allow a jury trial and should because of the high-profile and unusual case. A jury, he argued in court papers, should stand between a “zealous defense attorney” whose livelihood is at stake and the government who the defense contends charged Mumford “out of spite.”

“The defense believes that the charges here are motivated in part by vindictiveness and hostility arising from the not guilty verdict for Mr. Mumford’s client, Ammon Bundy,” Levine wrote.

At Levine’s urging, U.S. District Judge John C. Coughenour told prosecutors that they must turn over any text messages between marshals that might show any indication of hostility by them toward Mumford.

“We fully intend to comply with our obligations,” Ohms said.

Brown, the judge presiding over the occupation trials, would likely be called as a witness, as will the marshals, the lawyers present, the courtroom deputy and courtroom reporter, Levine told the court. He further suggested a jury trial be held to distance one federal judge from ruling in a case in which another sitting federal judge is questioned as a witness.

Coughenour, who noted that he’s only met Brown once, said he’ll issue a written ruling Thursday.