As Jian Ghomeshi’s defence team mined the testimony of the three complainants in the sexual assault trial, columnists and sexual assault survivors began publicly questioning the efforts of the prosecution and the police in the case.

​As questions arose throughout the trial, CBC News spoke with two prominent criminal lawyers to try to get answers.

Ghomeshi, 48, of Toronto, has been on trial on four counts of sexual assault and one count of overcoming resistance by choking at Toronto’s Old City Hall courthouse for the past two weeks. All the offences are alleged to have occurred in 2002 and 2003.

Did the police do a thorough investigation?

Much of the criticism surrounding the police was that they did not discover the more than two dozen emails the defence surprised the prosecution with in court.

But a former Crown attorney, Daniel Lerner, of Toronto, says that likely comes from a misunderstanding of the role of detectives.

“The police are investigating the offence not … every little detail of the witness’s life,” says Lerner, now a Toronto defence lawyer. “To a certain extent they rely on the witness to tell them what’s relevant.”

There would also be a catch-22 were the police to look for that type of evidence. If they found something, they would have to give it to the Crown who would be legally obligated to disclose it to the defence.

So it would be “very unusual” for investigators to comb through the complainant’s past communication with the accused, Toronto criminal defence lawyer Jonathan Rosenthal says.

“Can you imagine if they went and asked … for those emails and the defence didn’t have them?” the 27-year legal veteran says. “They’d have had to turn that over to the defence and the defence [would have] had a field day.”

Did the prosecution do its job?

The defence dropped several pieces of evidence on the witnesses throughout the trial — most notably, emails sent by both the first complainant and Lucy DeCoutere to the accused —  that significantly contradicted what both women told the court.

But the prosecution cannot be blamed if witnesses did not disclose certain evidence, Rosenthal says.

“The Crown asks the questions, the witness testifies,” the litigator says. “The Crown can’t control what a witness says.”

The two “very experienced, very competent prosecutors” Michael Callaghan and Corie Langdon presented the case no differently than the way the majority of sexual assault cases are presented, he says.

“There’s certainly no doubt that the Crown properly prepared this case.” 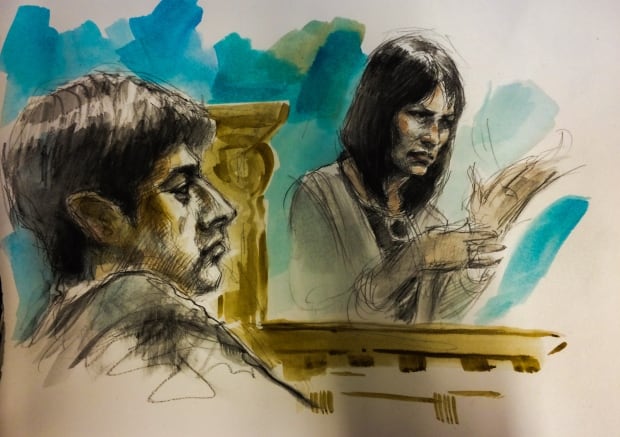 Lucy DeCoutere testifies in a Toronto courtroom at the trial of Jian Ghomeshi. (Sketch by Pam Davies)

And while there have been questions in the media about why the prosecution did not call evidence to support the different ways in which victims react to trauma, both Lerner and Rosenthal say case law already recognizes that.

In his closing arguments, Callaghan said the law states a witness can’t be considered less credible for continuing a relationship with an alleged abuser.

Lerner said: “Not only do you not need an expert, but the court probably wouldn’t even have allowed that because it’s already something the court takes notice of.”

He agreed with Rosenthal that the Crown presented a “more than competent case.”

“When I was a Crown, there was a motto I followed: You do the best you can with the evidence you’re given.”

How do inconsistencies affect the credibility of a witness?

The defence team chose not to open its own case in the trial, but instead used its cross-examination to discredit the prosecution’s witnesses.

Henein raised inconsistencies between media interviews each of the complainants gave before the trial and their testimony, suggesting they told “lies” under oath.

The justice system recognizes that complainants in sexual assault trials may act differently than one would expect, Lerner says, including offering new evidence to police and staying in contact with their alleged abuser. 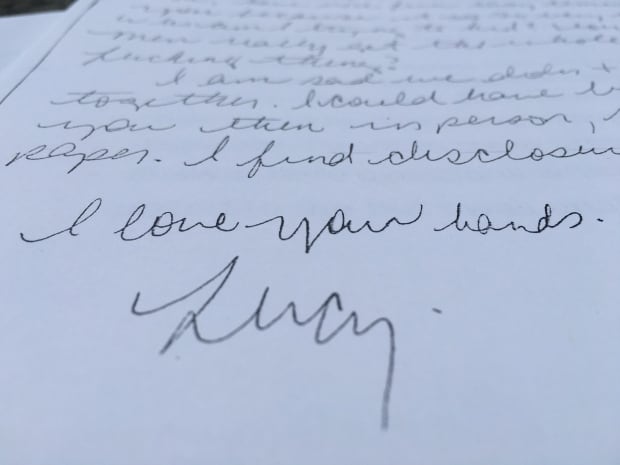 Part of the letter Lucy DeCoutere wrote Ghomeshi days after she alleges he choked and slapped her following a dinner date in Toronto.

“Late disclosure isn’t fatal in a sex assault case,” the former Crown says. “A person continuing to have a friendly or even romantic relationship with the person they claim sexually assaulted them is not unusual.”

But Rosenthal says that while the court understands there may be some inconsistency in terms of how a witness acts or what they say, the core of their narrative must stay truthful.

“What does affect the witness’s credibility is when there’s really such considerable and bald-face, significant contradictions,” he says, noting that DeCoutere testified she had no desire for a romantic relationship with Ghomeshi, while emails showed otherwise.

Why didn’t the accused testify?

The defence chose not to have Ghomeshi testify.

Numerous lawyers that spoke to CBC News said that was no surprise. The accused is not legally required to testify, nor can the judge hold that against him when weighing the facts of the case.

“If I was his lawyer, I would not possibly imagine putting him on the stand,” Lerner says. “You’re opening him up for cross-examination when these [Crown] witnesses have frankly not done that well.”

Sexual assault trials result in the lowest conviction rates of violent crimes in the country, according to Statistics Canada, aside from attempted murder. The latest figures show that of the small number of cases that make it to trial, about 45 per cent result in a conviction. A 2012 study found that for every 1,000 sexual assaults, only about 33 are reported, 12 result in charges and six go to trial.

“The defence, like with every criminal case, has the best chance of winning,” Lerner says. “But in the end, the witnesses were not contradicted that they were assaulted, they were not shaken [into saying] that they did consent. They tried to offer explanation for how they were acting afterwards.”

Rosenthal, however, says that if the witness testimony was as “inconsistent as it’s been reported, I think it’s very difficult for any judge to be satisfied beyond a reasonable doubt.”

Ontario Court of Justice Judge William Horkins, who heard the case, has ordered that court will reconvene on March 24.