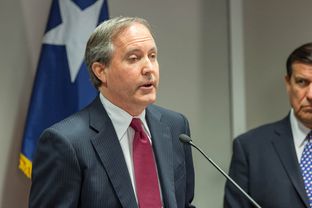 Ever since Texas Attorney General Ken Paxton was indicted last summer on three felony charges related to alleged financial fraud in his personal business dealings, he has said little about the matter save for an initial court appearance where he pled not guilty.

But he has lawyered up.

How Paxton is paying for his criminal defense — a legal tab estimated to easily exceed a million dollars — is one of the ongoing puzzles in the case against the state’s top lawyer.

Beyond confirming he would not use campaign contributions or taxpayer dollars, which he cannot by law because the case is not related to his public duties, the McKinney Republican has declined to elaborate on how he is covering his legal expenses. Mateja did not respond to a request for comment.

Soliciting donations for a legal defense fund would be difficult without running afoul of the state’s bribery statutes prohibiting elected officials from receiving gifts from individuals or entities subject to their authority, which, in the case of the attorney general’s office, could be quite broad.

Paxton could be footing the bill personally. But it’s unclear whether that is an option for the former lawmaker, who earns about $153,000 a year as attorney general. Prior to taking statewide office in 2014, he served in the Legislature for more than a decade, making a living as a lawyer and investor. His 2015 personal financial statement, filed as a part of required disclosures for state officials, reported a number of business and real estate holdings, including a title company and cellular tower.

It’s tough to get a full picture of Paxton’s finances from the statement, which only requires officials to report broad ranges of assets. But it does indicate he has a number of shares in stocks and mutual funds, as well as business assets that amount to a minimum of $35,000.

If Paxton is unwilling or unable to pay his legal team on his own dime, it leaves him in a difficult spot. He could step down from office, which would free him up to raise money for a defense fund. But Paxton has said he will not resign — and he has so far faced no political pressure to do so.

He may find lawyers sympathetic to his plight willing to offer their services pro bono or at a deep discount. That scenario also seems unlikely. (Mateja did not respond to a question about whether any of Paxton’s legal team had discounted their services.)

“A case like Paxton’s could easily consume most, if not all, of a lawyer’s time. Unless the lawyer is independently wealthy, he or she could simply not afford to undertake such a time-consuming case without being paid significant fees,” said Dallas appellate lawyer Chad Ruback in an email. Ruback estimated that the collective rate for Paxton’s team could exceed $3,000 per hour, with a total fee for his defense easily passing one million dollars.

A November draft opinion from the Texas Ethics Commission offered a clue to another possible alternative. Crafted after the state regulatory body received an anonymous request for legal guidance on whether employees of the attorney general’s office could accept gifts from out-of-state donors, it appeared to open the door for the establishment of a legal defense fund.

If the money came from outside of Texas, a draft opinion on the question from the agency’s staff reasoned, it would minimize chances of donations from a person or entity subject to the attorney general’s jurisdiction, thus avoiding any violation of the state’s gift-giving laws.

But earlier this month, after failing to settle questions about how potential donors would be vetted to ensure they did not have business before the state, the commission’s members declined to approve the opinion.

The move doesn’t block Paxton from taking that route — but it doesn’t pave the way legally for him to pursue it either. So if Paxton did go ahead with a legal defense fund backed by out-of-state donors, he’d likely need his lawyers to log more hours justifying it. A factor that may work in his favor: Under one proposal considered by the ethics commission, Paxton wouldn’t have to report the gifts until he filed his next annual personal financial statement in April, giving him some time to work out his legal arguments.

However Paxton ends up bankrolling his legal team, it appears he’ll be keeping them in business for the long haul.

After the judge presiding over the case denied six motions to throw out the charges in December, Paxton appealed the ruling to a higher court, where it awaits a decision. If that court sides with the trial judge, Paxton could continue the appeal to the state’s highest criminal court, pushing the date of a possible trial even further into the future.

There are also indications Paxton’s legal woes could grow.

A set of special prosecutors, separate from those who brought the securities fraud case against him, are investigating a land sale tied to a business group including Paxton, Collin County District Attorney Greg Willis and eight other partners. The property in question became the site of the Collin County appraisal district after receiving a critical zoning change, which Paxton has said he had no role in acquiring.

The attorney general is also facing a disciplinary probe from the State Bar of Texas related to his instructions to state agencies in the days following the U.S. Supreme Court’s ruling on same-sex marriage. Paxton issued an opinion telling county clerks that though they might face legal ramifications, they could opt out of issuing marriage licenses to same-sex couples if the clerks had religious objections to doing so.

A complaint filed by a group of lawyers last summer alleges the opinion violated the professional code of conduct because it advised state officials to break the law.

Cynthia Meyer, a spokeswoman for Paxton, told the Tribune when news of the state bar inquiry emerged that he is sure he has not violated his oath.

“This complaint has always lacked merit, and we are confident the legal process for resolving these complaints will bear that out,” she said in an email.