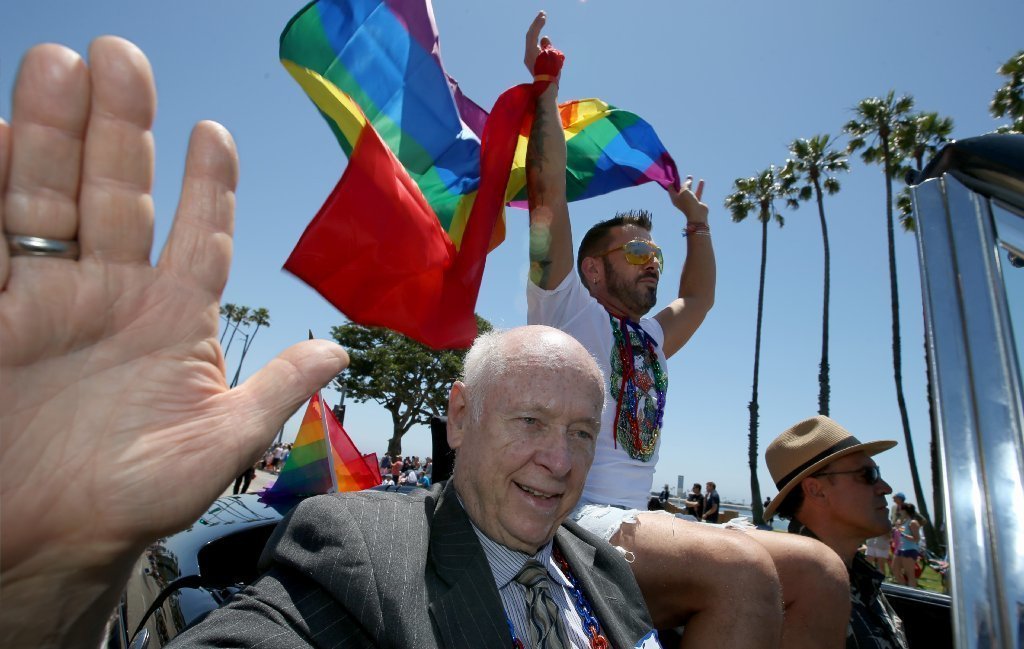 His client had been arrested when a San Jose police officer saw him engage in lewd conduct inside a booth at an adult bookstore. Prosecutors offered the man a plea deal that would have spared him from jail time and registering as a sex offender.

For most attorneys, the deal would have seemed like a gift. But Nickerson had a plan, and urged his client to take the case to trial.

The officer had leaned into the booth to observe the man touching himself. To be convicted of lewd conduct in California, Nickerson argued in court, a defendant would need to believe someone would not just witness the conduct, but be offended by it.

The argument might seem indelicate, but it was effective. The jury hung, and prosecutors dropped the case.

The victory was the first in a career that would see Nickerson become a legal champion for LGBTQ rights as the go-to criminal defense attorney for gay and bisexual men accused of lewd conduct and indecent exposure in California. In the last few decades, he has waged legal war on undercover stings, an age-old police tactic that activists condemn as a form of entrapment that unfairly singles out gay men.

In courts throughout California , Nickerson has argued that officers engage in discriminatory policing by exclusively using attractive male officers to target men seeking gay sex. His victories, combined with changing attitudes toward gay sex, have led some police departments to scale back or end their use of the stings. Many of the stings take place in public restrooms, causing some colleagues to playfully label Nickerson the “toilet lawyer.”

Over the years, Nickerson has become a beloved figure in LGBTQ circles and the legal community. Earlier this month, he rode in a float during Long Beach’s gay pride parade, seated next to the grand marshal, a former client.

Not all are so quick to praise Nickerson. Some police leaders believe his claims of discrimination are ludicrous, arguing that the stings target illegal public sex, not gay men specifically. And early in his career, Nickerson faced serious legal problems. His law license was suspended twice, and he served jail time for helping an accused child molester flee the country in 1988. Nickerson says it was a mistake that haunts him to this day.

Still, he is lauded by LGBTQ activists for work that has saved clients from legal peril in Fresno, Bakersfield, San Jose, Long Beach and other cities, helping them to avoid a criminal record or a place on a list of registered sex offenders. His victory at the California Supreme Court in 1996 also made it easier for defendants to argue that police discriminated against them during an arrest.

“I’ve seen him restore people’s dignity, their very lives to them, that were unjustly taken away because of these kinds of discriminatory actions,” said Eric Schweitzer, who co-chairs the legislative committee for California Attorneys for Criminal Justice.

Nickerson said he does not condone his clients’ conduct, but empathizes with it. The 75-year-old attorney, who spent decades struggling with his own sexuality before coming out as gay, said most men who “cruise,” or seek anonymous sex in public, do so because they fear being outed.

Even in the age of gay-friendly dating apps like Grindr, few want to leave evidence of their sexual orientation for fear of blowback from family or friends, he said.

Nickerson said his fight against anti-gay sentiment began in his parents’ living room in Modesto.

With a Pentecostal minister for a mother and a former Golden Gloves boxer for a father, Nickerson didn’t dare come out to his parents. They had been suspicious something was “off” with their son from a young age, and the repercussions were often severe.

The normally excitable Nickerson waves his hands and punctuates sentences with a laugh when he speaks about his career, giving off a vibe that’s somewhere between paternal and mad scientist. But that energy melts away when he recalls his childhood.

“I’m getting straight A’s at school. I’m growing things in the backyard. I never disobey my parents, and yet, I continue to get hit by my father, and my mother keeps trying to cast this demon out of me,” he said.

After graduating from Stanford University, where he studied business and history, he took a law school entrance exam but ended up running his family’s roofing business to prove a point to his father. Nickerson also continued to pursue relationships with women. He married and fathered a son in the 1960s before eventually divorcing.

Nickerson said it wasn’t until 1975, after the divorce, his father’s death and a few business struggles, that he was ready to accept his sexuality, enroll in law school and fight for gay rights.

“It dawned on me that if I really wanted to make an impact in this world, I should join this movement, the third of the big ones: Black. Women. Gay,” he said. “See what I could do to help move the wheel forward.”

Those closest to Nickerson say the suffering he endured as a child fuels him in the courtroom.

“He has used those painful issues to drive him,” said his ex-wife, Billie Sommerfield. “He wants to help people avoid experiencing the things that he experienced.”

The use of undercover cops to target gay men in Southern California dates back to the early 20th century, when gay sex was illegal. In recent decades, police agencies have used stings to respond to complaints about public sex in parks, restrooms or other places frequented by families. Decoy operations are necessary, some police officials say, because lewd conduct is a misdemeanor that requires officers to witness the conduct to justify an arrest.

Many arrested in bathroom stings will plead to a lesser crime of lewd conduct to avoid the risk of ending up on a sex offender list alongside people convicted of rape, child abuse and other sexually violent offenses, according to attorneys who try those types of cases.

But Nickerson and others contend that undercover officers often exchange flirtatious signals and make arrests of men who think their advances are welcome, when no one else is nearby to be offended. They say the stings ensnare men who hadn’t otherwise been seeking sex and that they rarely, if ever, target straight people.

“Nobody has done the kind of work that Bruce has done. But he can’t be all places at all times,” Schweitzer said. “You’re going to get situations where you have these guys that are registering for the rest of their lives, simply for cruising.”

Last year, Nickerson won a major decision in Los Angeles County when a judge ruled that the Long Beach Police Department’s use of undercover stings was discriminatory. Statistics cited by Nickerson in court showed that city police had arrested at least two dozen men seeking gay sex during stings in 2013 and 2014. No women, or men seeking heterosexual encounters, were arrested in those stings.

Long Beach Police Chief Robert Luna said the department has not used the tactic since 2015, but bristled at the accusation that his department discriminated against members of the LGBTQ community.

“Our vice unit does handle things a little bit differently, absolutely respecting the rights in our LGBT community, but at the same time, respecting the rights of others that are using the restrooms too,” Luna said, adding that the stings might still be used as a “last resort.” “We’re just trying to find a balance.”

A decade ago, conservative firebrand Bill O’Reilly lambasted Nickerson during a nationally televised interview after the attorney won a similar case in Fresno.

“You should be very proud of yourself for putting perverts on the street, sir,” shouted O’Reilly, who was recently fired from Fox News in the wake of a sexual harassment scandal.

Nickerson has had his own serious legal problems.

In 1997, his law license was suspended for nine months after he tried to swipe a pornographic video from a police evidence locker in a case he was defending, according to State Bar records. He admitted that he wanted to view the video, of two consenting adults, for his own personal interest. He was also placed on probation for attempted petty theft, records show.

It was his earliest suspension, however, that threatened to derail his career.

In 1991, Santa Clara County prosecutors charged Nickerson with helping a client, a suspected child molester, flee the country. Nickerson pleaded no contest and served 80 days in jail. The State Bar suspended him for 18 months.

Nickerson said he had never intended to help his client, Carl Kaminski, elude police. He had agreed to represent Kaminski but had a pre-scheduled vacation in Peru and was concerned his client might be arrested while Nickerson was out of the country. The lawyer said he arranged for Kaminski to temporarily stay in Germany, on a promise that the two would return at the same time. Nickerson drove him to the airport, but Kaminski never returned.

Kaminski remained on the run for nearly two decades. Nickerson says he deeply regrets how his actions might have affected Kaminski’s victims.

“These young people’s ultimate healing may have been delayed by my activity, and I am truly remorseful on that score,” he said.

In 2006, Kaminski was arrested in Germany and brought back to the U.S. Meanwhile, Albanian police accused him of sexually abusing three children during his flight from justice, according to court records.

Nickerson said he was unaware of Kaminski’s alleged crimes in Albania until he was told recently by a Times reporter.

The attorney shrugs off other criticism of his work, believing the barbs about his defense of men arrested in bathroom stings come from a place of misunderstanding.

“Persons who cruise in public places are in the early stages of coming out. They frequently are obsessed with guilt and shame and they wouldn’t be caught dead going to a gay bar because they’re not ready for that,” he said. “But this is how they’re wired. This is how they love.”

Nickerson hopes to push for legislative changes that would remove the hundreds of men previously convicted in cruising stings from the state’s offender rolls. But he isn’t sure how much time is left in his crusade. He was diagnosed with congestive heart failure in 2015, and said doctors at the time believed he had only two years to live.

Still, his work continues. In addition to his victory against the Long Beach Police Department, he won findings of factual innocence last year for five men arrested during a lewd conduct sting in San Jose.

Those who know him best say Nickerson is likely to fight for his cause until the last possible second. Stephanie Loftin, a Long Beach attorney who has worked with Nickerson on several sting cases, said she can’t see a future where Nickerson retires or takes a rest.

“He’s gonna die with his boots on,” she said.

Follow @JamesQueallyLAT for crime and police news in California.