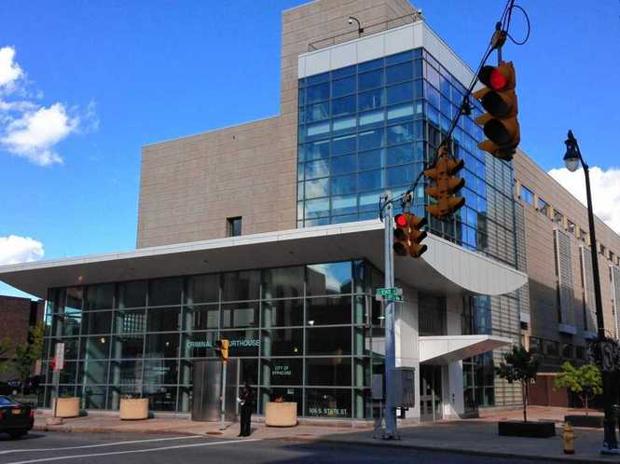 Syracuse, NY — Many more criminal suspects in Onondaga County will be eligible for a free lawyer starting this week.

Anyone charged with a crime (misdemeanor or felony) who makes less than 250 percent of the federal poverty level now qualifies for a free lawyer. That means single people making less than $29,700 or a family of four making less than $60,750.

No one knows how many more people might request a free lawyer under the new guidelines: it’s never been done before. But millions more in state money will be going toward this initiative and others coming down the road.

Onondaga County Attorney Bob Durr gave a rough estimate of “at least 1,000” more people who might request a free lawyer, but added some may want to hire their own anyway. Neither he, nor the state or other stakeholders, had any scientific estimate.

There are other important changes in the new guidelines:

• Certain assets (like houses and cars) can’t automatically be counted into someone’s income.

• A defendant is presumed eligible for a free lawyer unless there’s proof that he or she can afford one.

• Anyone confined in jail or detained by police is presumed eligible.

• Ability to post bail or bond does not make someone ineligible.

• Resources of a spouse or a parent are not considered income by the defendant.

• Child support payments do not count toward income.

The new guidelines are the first major changes in Onondaga County required under a statewide lawsuit that exposed problems with Constitutionally-required legal representation for the poor. The deadline for the new eligibility guidelines was Monday.

Onondaga County was one of five counties — stretching from Long Island to Western New York — sued by the state Civil Liberties Union nearly a decade ago for failing to meet obligations to protect legal interests of poor criminal suspects.

There’s been lots of planning done behind the scenes, but very few deadlines for concrete action to this point.

In fact, the liberties union charged this week that Onondaga County had done less to fix its problems than any other county.

One of the major arguments in the lawsuit is that criminal defendants are treated differently across the state.

The state has also hired staff to monitor what’s going on. It’s all part of the historic 2014 settlement in Hurrell-Harring v. New York, in which the state promised to spend upwards of $100 million to make sure poor are given adequate legal representation.

The settlement called for a 7-year plan to fix myriad problems, ranging from lack of representation to overworked lawyers without resources to defend their clients.

Hirose pointed to Ontario County’s transition to a public defender system and Suffolk County’s willingness to beef up its assigned counsel program as signs of meaningful change. By comparison, Onondaga County has changed very little so far, she said.

Another major changes that must happen by next month is guaranteeing that every criminal suspect (from DWI to murder) gets a lawyer from the very beginning — at arraignment.

Hirose said Onondaga County wasn’t close to meeting that deadline. In other words, some criminal suspects were still appearing in court without a lawyer, with their liberty at stake. Some suspects were being held in jail until a lawyer could be found for them.

Having no lawyer right away could also significantly delay a criminal case and weaken the accused’s ability to negotiate a plea deal.

One of the plaintiffs in the lawsuit was a former Syracuse woman, Jacqueline Winbrone, 49, who was arrested after her mentally-ill husband placed a gun in her car. There was no lawyer at arraignment and she ended up being sent to jail on $10,000 bail, where she remained for 50 days. She called her lawyer for five days straight with no luck. Her husband died while she was in jail. She was later released.

“I still have nightmares of being sent to jail for a crime I didn’t commit,” Winbrone told Syracuse.com in 2014. “There needs to be better representation for (people in) the state. I don’t want anyone to go through what I went through.”

Durr promised that the county would meet its obligation to guarantee a lawyer by the November deadline.

A local defense lawyer who also serves as Pompey town justice said many courts now have an “on-call lawyer” who must be available to handle arraignments at any time of day.

Lawyer Ralph Cognetti said other courts have a lawyer who is paid to attend all court appearances and represent those who do not have lawyers. But he added that not all courts have such resources yet.

There’s a ton of work left to do: it’s going to take at least another half-decade to enact all of the changes in the settlement agreement.

Next up, after lawyers at arraignments, is caseload relief. The state has asked for proposals from vendors to study caseloads and help come up with recommendations for reasonable caseloads, said Patricia Wrath, lead state attorney for implementation.

The state hopes to come up with recommendations in time for the state’s 2017-18 budget negotiations: it’s not clear how much caseload relief will cost, Wrath said.

But the lawsuit provided a stark reminder of the problem: In Onondaga County, the average assigned case gets less than four hours of attention from a lawyer. In 95 percent of cases, the lawyer spends less than one hour investigating the facts, said Gary Stein, who led the pro bono representation by Schulte Roth & Zabel LLP.

There are also plans in the future for more training and money to pay for private investigators and other tools to help defend clients.

On its own, Onondaga County this summer put out a request for proposals to determine the future of the assigned counsel program.

The current assigned counsel program — through the county’s bar association — submitted a proposal to keep running the program.

A group of four lawyers — including Cognetti as corporation president — submitted a proposal to run the program. The other lawyers were Susan Carey, Christina Cagnina and Cheryl Jones.

And non-profit Hiscock Legal Aid, which provides free lawyers to defendants on appeal, proposed taking over all criminal defense under a contracted public defender system (that means staff lawyers as opposed to lawyers paid per case).

In the end, the county opted to stick with the original assigned counsel provider, Durr said. The new contract is still being worked out, he said.

The program’s executive director, Renee Captor, directed all questions to the head of the board, Lauren Seiter, who did not return calls seeking comment.

But the NYCLU, which criticized the program in the current lawsuit, said it wasn’t satisfied with what’s happened so far.

“The concern is with the provider’s history in unwillingness to provide adequate defense services,” Hirose, the NYCLU lawyer, said. “Things have not changed in that county.”