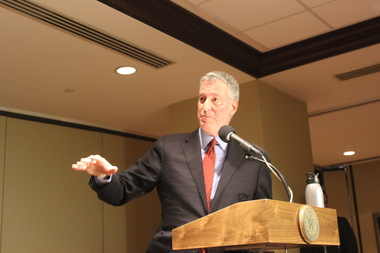 Days after saying he would no longer speak about the federal probe into his fundraising activities, Mayor Bill de Blasio said he asked a lawyer for his 2013 campaign to reach out to the office of U.S. Attorney Preet Bharara. View Full Caption

MIDTOWN — One day after saying he would no longer speak about the federal probe into his fundraising activities, Mayor Bill de Blasio hired a white collar criminal lawyer to reach out to the office of U.S. Attorney Preet Bharara.

“I authorized yesterday a lawyer representing my 2013 campaign to reach out to the U.S. Attorney’s office and offer any assistance we can provide, let them know we’re happy to work with them in any way that would be helpful,” de Blasio said Wednesday after a speech at the Rev. Al Sharpton’s National Action Network’s convention.

“He was retained yesterday by the mayor’s 2013 campaign at the mayor’s direction,” Levitan said.

When the mayor spoke earlier Wednesday, he did not mention that he had hired Berke the day before, saying only that “he represents the 2013 campaign.”

Berke’s biography says that he is a partner at the firm who represents clients in “sensitive and high-profile investigations and proceedings,” including “all aspects of white collar crime.”

Berke’s office said he was not immediately available for comment.

De Blasio emphasized that neither he nor anyone from his campaign has “heard from any federal agency” and “there’s been no outreach of any kind” about the widening federal corruption probe of the NYPD that has now reached to de Blasio’s fundraising activities.

Bharara, speaking at a gala Tuesday night hosted by good government group Common Cause, spoke of his ongoing investigations of Albany corruption and told guests to “stay tuned” for new developments.

“We will keep looking hard at corruption in our legislative branch, as we have been,” Bharara said, according to the Daily News. “But not just there: in the executive branch, too, both in city and in state government.

“Executive offices in government are far from immune from the creeping show-me-the-money culture that has been pervading New York for some time now.”

Authorities are investigating two businessmen, Jeremy Reichberg and Jona Rechnitz, as well as cash, gifts and international trips that they may have provided to high-ranking NYPD officers. Six NYPD officers so far have been stripped of their guns and badges or placed on modified duty as a result.

The same probe is also examining Reichberg and Rechnitz donations to the mayor’s campaign and to a non-profit the mayor used to realize his political goals. The non-profit is not subject to city campaign finance disclosure and donation limit rules.

Good government and tenant and labor groups called for an investigation into the non-profit, saying it violated campaign finance laws and raised issues about “who has influence and access to the policymaking process.”

Both men were on de Blasio’s inaugural committee. Rechnitz and his wife contributed $4,950 each to de Blasio’s 2013 mayoral campaign. Reichberg raised $35,000 for the Campaign for One New York, which the mayor used to push for his universal pre-K initiative and affordable housing rezoning plan.

The probe is focusing on whether donors to the Campaign for One New York received anything in return for their donations. De Blasio said that nothing improper occurred.

“Someone who makes a donation, that’s their choice. But they should expect nothing in return,” de Blasio said.

The mayor said that Bharara’s office acknowledged the call but did not offer any other information.

“I believe that message was fully received,” de Blasio said.

Bharara’s office did not respond to a request for comment.