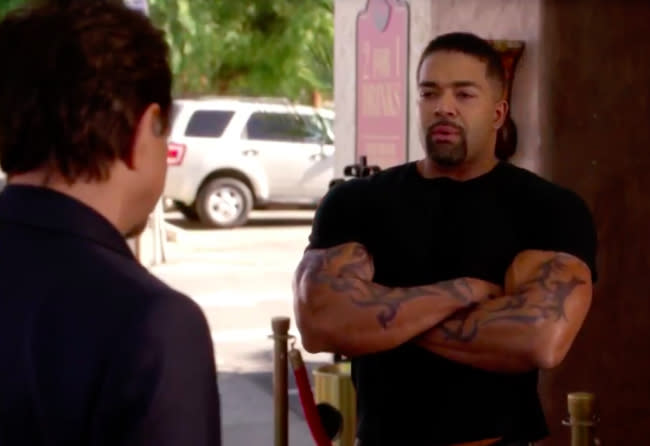 Harvard Law School graduate and wrestler-lawyer David Otunga is married to an actual Academy Award-winner, and the Smackdown commentator has been adding to his own acting resume over the past couple of years. (Because being on WWE television every week for years and years doesn’t count to Hollywood, for some reason.)
A couple years ago, Otunga appeared on General Hospital, and that was pretty awesome. He also appeared in 2013’s The Call, AKA “that one WWE Studios movie that Halle Berry was in for some reason.” His IMDB page lets us know that he’s also been a guest star on a Tyler Perry TV show that airs on OWN, and he also appeared in a movie starring Amber Rose. So, you know, he gets around.

This week, though, Otunga got arguably his highest-profile guest acting gig to date, when he appeared on Criminal Minds as a tattooed, muscle-bound bar employee named Dwayne. Art imitates life?

Yep, that’s David Otunga acting opposite Joe Mantegna, and doing a perfectly serviceable job of portraying “named tough on episode of police procedural.” I’ve never seen a single episode of Criminal Minds, but Wikipedia tells me it’s been airing on CBS for 12 seasons and 266 episodes.

That … that can’t possibly be right, can it? It also has two spinoffs? 12 million people watched the last season? What is even happening? I wasn’t aware it was legal for CBS to show anything other than shows in the NCIS franchise and The Big Bang Theory. I think I’m going to have to go lay down for a while. Congrats, David. You’ve given me a lot to take in.