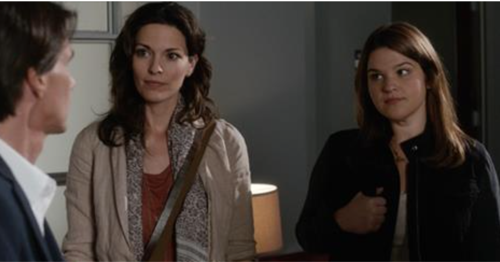 Tonight on CBS Criminal Minds:Beyond Borders continues with an all new Wednesday April 6, season 1 episode 4 called “Whispering Death,” and we have your weekly recap below. On tonight’s episode, the team travels to Japan to assist local law enforcement in investigating homicides made to look like suicides.

On the last episode, the International Response Team headed to Cairo when an Egyptian-American former U.S. serviceman was killed in a gas attack there and his friend went missing. Did you watch the last episode? If you missed it, we have a full and detailed recap right here for you.

On tonight’s episode as per the CBS synopsis, “the team travels to Japan to assist local law enforcement in investigating homicides made to look like suicides. Meanwhile, Mae encourages Clara to get out and enjoy herself.”

Tonight’s episode looks like it is going it going to be great and you won’t want to miss it, so be sure to tune in for our live coverage of CBS’s Criminal Minds: Beyond Borders at 9:00 PM EST!

The night before his body was found, Damien Hall had been enjoying himself at a celebratory dinner with his brother Kristopher. Apparently the two men had traveled to Toyoko together to get a sense of the business scene there and so that late night drink of theirs had been them celebrating their new start in Japan. Only the brothers had gone their separate ways following that drink. Damien had wanted stay out and flirt with a couple of the local women while his very married brother had thought it best to return to their hotel. So the last Kristopher had seen of his younger brother, Damien had been intent on continuing to celebrate even if he ended up surrounding by strangers.

And therefore there hadn’t been a reason for Damien to commit suicide yet someone had wanted it to look that way on tonight’s all new episode of “Criminal Minds: Beyond Borders”. However, as they began to look into Damien, the IRT were eventually informed that Damien hadn’t been the only unusual American suicide. There had in fact been two other victims. A young woman that had gone to Japan to teach and a blogger that had wanted to write about the Japanese scene.

So three Americans were reported to have killed themselves all in the same week and the local police hadn’t thought that was suspicious until Agent Garrett and his people arrived on the heels of Damien’s death. And according to Clara who filled her people in on the Japanese culture, they would never have questioned any of those cases because suicide was considered to be an honorable act in Japan. Who revere it and have actually come up with more than one name for the various methods that a single person could use.

Yet, despite their culture, Garrett had wanted to know why the local police hadn’t questioned the American deaths when on record there had only been five other Americans to commit suicide in their country’s history. So the agent considered that to be a massive oversight and he began his team’s relationship with the local police by asking politely albeit firmly for the local’s permission to double-check their work. And the errors in their overall investigation was just glaring.

The local police hadn’t asked anyone available at the restaurant if they had seen Damien interact with anyone else after his brother had left much less fetch a taxi or get directions to the suicide forest. So they hadn’t known that it had been Damien that had left the restaurant and not his brother. Also there had been a camera focused on Damien that Matt had found, but that the locals had again overlooked.

And so there was a killer in Japan! However, the locals still needed convincing before they were willing to accept the IRT’s take on what happened. So their needless back and forth resulted in a fourth victim. Only that one had been one of their own. The Chef that had been killed in his own restaurant had been Japanese.

Though the IRT had been the first to realize the UnSub had also killed the Chef. Clara had found a video camera at the crime scene which had been in close proximity to where Damien had last been seen. And instead of dismissing the chef, the team realized he had to be most the important.

Besides the chef, everyone other victim had been American. So the team had looked into the chef and they found out he had left his previous job at another restaurant after he said his former boss’s son would never able to take over the business. Therefore, the team followed up that lead and looked into his boss Daichan and they found out that Daichan and his wife had committed suicide after their business went under.

And that it hadn’t been long after their deaths, that the killings began.

Daichan had apparently owned the restaurant and the building, but the victims had all been connected to it. The teacher who had been about to get married had been a renter so she was going to end her lease, the chef had gone to another competitor, and the Hall brothers had bought out the place because they would to build on the old site. So after Kristopher had finished explaining that he hadn’t wanted the police to know his brother had left with prostitutes, the UnSub had come back for him and had thrown him out of his hotel window.

So what happened to Daichan and his wife had to be personal and the UnSub had to be their son. The same son that was anti-social and whose own father hadn’t had faith in him because he liked to dress as a woman. And the same son that had moved back into his childhood home that had been plastered with images of his dead parents.

And so the team knew they were looking for Yukio who had also been kind of to leave behind a hit list on his laptop. However, they found him not long after he had set a man on fire. So they had to tend to the victim first and then tried to convince Yukio that the more honorable thing for him to do would be turn himself in. And they had tried to appeal to him as the young man whose parents were ashamed of him yet he had been armed.

Yukio had his grandfather’s service piece from WWII and he had been so intent on finishing the job that the Garrett had to shoot first.

So the IRT had put down their UnSub however Yukio’s death had been a turning point for Clara. Mae had been trying to get her to enjoy herself by going out and, after this case, she told Clara that she shouldn’t end up like Yukio. Locked up in his house for the next thirty years because he had been too afraid of the world.