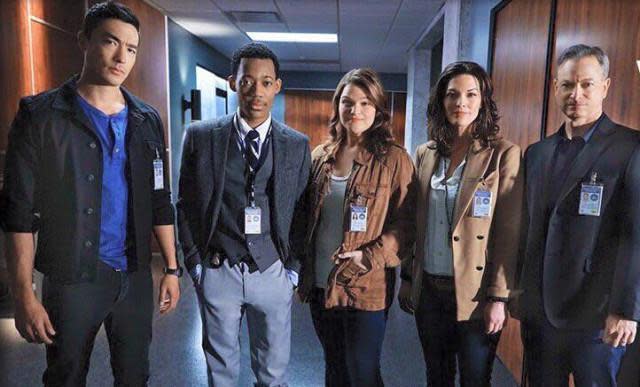 A new franchise spin-off from your favorite depressingly gruesome serial-killer series, Criminal Minds: Beyond Borders features another new (yet completely familiar) team of FBI profilers, this batch dispatched every week to some far-flung locale to catch — what’s the Criminal Minds secret word, kids? let’s say it together — unsubs, the common jargon for “unknown subjects.”

Gary Sinese, who spent almost a decade spinning off the CSI franchise that was set in New York, sets up shop in this Minds sequel as Jack Garrett (not to be confused with Hawaii Five-0’s Steve McGarrett) after a brief baton-hand-off from original-brand Criminal Minds’ Joe Mantegna. (Fun fact: Sinise and Mantegna both started out as theater guys who shot to prominence in works by macho playwrights such as Sam Shepard and David Mamet.)

The opening hour, premiering Wednesday after Survivor and Criminal Minds — and those are exactly the two shows Beyond Borders combines with appalling cynicism — finds Garrett and his team winging off to Thailand, where a couple of young American women, volunteering on a farm, are taken captive by a demented-looking local. (Given that despicable behavior by foreign populations is baked into its premise, Beyond Borders is, you can be sure, going to be charged with xenophobia or worse by some offended viewers very quickly.)

There’s a lot of chatter between McGarrett and his minions about the unsub’s background and motives — “torturing animals is a precursor to serial killing”; “that stresser combined with his homicidal tendencies created the perfect storm” — while, back in America, families nervously await updates. There, they are comforted by Tyler James Williams’ tech analyst Monty Montgomery. This character is a replicant of other CBS procedural tech nerds, such as NCIS’s Abby and Criminals Minds’ Garcia, so expect Williams, last seen been torn apart by walkers on The Walking Dead, to see his Q-rating soar.

Beyond Borders also features Law & Order’s Alana de la Garza as a trusty second-in-command co-star. The overseas crew trots through some colorful scenery looking for their unsub — visually, the show plays like a nightmare edition of The Amazing Race.

All this, plus the show takes the time to twit Thailand for having unenlightened (i.e., not American-approved, politically correct) views toward women. On the other hand, Garrett carries around an iPad for the sole purpose of showing local law enforcement pictures of the missing girls and never seems to have any WiFi problems. Oh, yeah, this show is going to be a really popular export.

Criminal Minds: Beyond Borders airs Wednesdays at 10 p.m. on CBS.