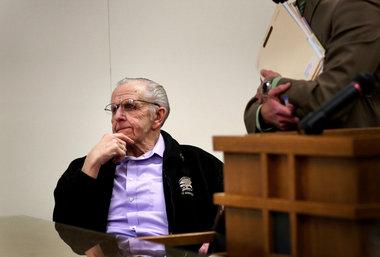 JACKSON, MI – Raymond McKnight was sober and traveling well under the posted speed limit when he indicated two bicyclists swerved into the road, according to his lawyer Michael Falahee and Falahee’s review of the police investigation.

“There is simply nothing in the police report that would suggest that Mr. McKnight committed any moving violation, which is a requirement of the statute,” Falahee wrote in an email Tuesday.

McKnight, 76, is accused of two misdemeanor counts of committing a moving violation, causing the deaths in October of friends Deborah Patterson, 62, and Mary Massengill, 66.

He was arraigned last month in Jackson County District Court. There was a pretrial scheduled for Tuesday, May 2, but it has been delayed until June 13.

“This case involves a sad and unfortunate situation for all parties involved, including my client,” Falahee wrote in response to a phone call from a reporter. “However, just because an accident occurred does not mean a crime occurred.”

McKnight was driving a Mercury Sable east about 4:45 p.m. Oct. 7 on Wamplers Lake Road in Norvell Township when the car struck Massengill and Patterson.

The theory is the two, experienced cyclists wearing helmets, were lawfully riding on the shoulder, a designated and marked bike path, Prosecutor Jerry Jarzynka earlier said.

Jarzynka said it was his office’s intent to argue the car hit the bicyclists because McKnight made a lane violation. If it is somehow shown the women were outside the designated bike lane, prosecutors will contend he was traveling at a speed that prevented him from stopping “within the assured, clear distance ahead,” he said in early April.

“These statements from the prosecutor clearly indicate that that office does not know what moving violation, if any, was committed by Mr. McKnight,” Falahee wrote.

“It certainly seems that this case is being pursued by the prosecutor based on the unfortunate outcome of the accident rather than the facts of the case.”

Falahee said one of the police investigators indicated he was “unable to determine an area of impact,” and testing revealed McKnight had no drugs or alcohol in his system.

Since the crash, McKnight voluntarily relinquished his driver’s license, Falahee said, disputing or clarifying information presented at McKnight’s arraignment. At that hearing, it was said his license was suspended by the Michigan Secretary of State.

McKnight had a valid license at the time of the crash, Falahee said, and he does not believe McKnight has any criminal history.

“It’s been really difficult on him, as it has been on the families of the victims,” Falahee said.

“It is not an easy situation for anyone.”