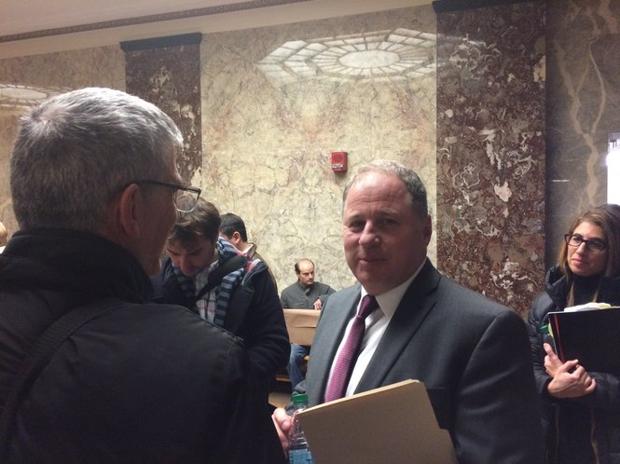 HACKENSACK — A municipal judge said Thursday a citizen activist’s official misconduct complaint against Gov. Chris Christie over his alleged actions in Bridgegate has not been dismissed as the  governor’s attorneys claimed, and promised to decide if it can proceed anew next week.

The judge, Roy McGeady, said he was puzzled as to why Christie’s attorneys did not show up to a hearing Thursday in his courtroom.

Separately, the citizen activist, Bill Brennan of Teaneck, announced he’ll petition the state Supreme Court for a special prosecutor to handle the case should it be allowed to proceed.

The complaint accuses Christie of knowing about about the politically motivated conspiracy to shut down Fort Lee’s access lanes to the George Washington Bridge but failing to act to reverse it.

It’s a charge Christie has steadfastly denied since the case was allowed to proceed in October. Last week, the Bergen County Prosecutor’s Office told a state Superior Court judge it was not inclined to pursue charges against Christie, saying there wasn’t enough evidence.

Earlier this month, Superior Court Judge Bonnie Mizdol agreed with both prosecutors and the governor’s defense lawyer, Craig Carpenito, that Christie was had been improperly denied the right to “the guiding hand of counsel” at an initial hearing last October in which McGeady determined there was probable cause for the case to proceed.

Mizdol however, denied the governor’s motion to dismiss the case, and instead sent the complaint back to McGeady to be re-heard, this time allowing the governor’s lawyers to participate in the probable cause hearing.

But at that hearing Thursday, the defendant’s table sat empty in McGeady’s courtroom.

In it, Carpenito wrote that the complaint “has been thoroughly investigated by the (Bergen County Prosecutor’s Office) and dismissed” and that Thursday’s hearing “is a legal nullity” which neither he nor the governor would be attending.

McGeady, however, said he was puzzled that the governor’s attorneys hadn’t bothered to attend the very probable cause hearing they’d vigorously demanded to be part of two weeks earlier.

“Only Mr. Carpenito seems to think it’s dismissed,” said McGeady dryly addressing the empty defendant’s table. “I will proceed for a probable cause hearing.”

In November, a jury found Kelly and Baroni guilty on all counts in the scheme to close access lanes to punish Fort Lee Mayor Mark Sokolich for not endorsing Christie’s re-election. Wildstein, a cooperating witness in the federal trial, had earlier pleaded guilty to federal crimes for his role in plot.

However, the judge on Thursday denied Brennan’s request to appoint a special prosecutor to handle the official misconduct charge.

Brennan said he believes the Bergen County prosecutor’s office doesn’t want to pursue the case because it serves at the pleasure of the governor.

“In any master/servant relationship there is a conflict of interest,” he said. “Their reasons are quite simple: Their jobs are in jeopardy if they choose to prosecute,” alleged Brennan. “This defendant has got the prosecutors doing back flips to get the case dismissed.”

“The problem I have with Mr. Brennan’s request, is that we can’t let witnesses decide who’ll prosecute cases,” the judge said. “I understand Mr. Brennan’s concern, but he’s a witness. Who prosecutes is an executive branch decision.”

McGeady said he would examine the new evidence and federal testimony and issue a ruling on whether or not the case can proceed next Thursday.

Outside the courtroom, Brennan, also a Democratic candidate for governor,  said he would immediately file an emergency appeal with the state Supreme Court seeking to overturn McGeady’s ruling denying a special prosecutor.

“As of today, no one has dealt with the merits of the arguments I am making,” said Brennan. “The Bergen County prosecutor and the office of attorney general are going above and beyond the call of duty (acting) as defense counsel for defendant Chris Christie, and that’s inappropriate.”